Raven: The Hidden World (The Remarkable Adventures of Tom Scatterhorn #2) 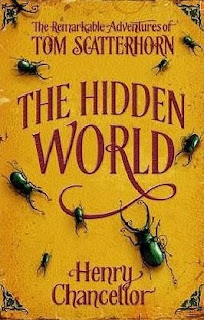 Summary: It's the start of the summer holidays, and Tom is back at the Scatterhorn Museum. But when an unexpected guest arrives his world is thrown into disarray. Her name is Pearl Smoot and she is a traveler - like him. She needs Tom's help. Urgently.
There is evil afoot in the shape of Tom's old enemy. Don Gervase Askary. He has captured Pearl's father and brother, and what's more, she thinks he's holding Tom's parents too. Tom and Pearl set off to rescue them, on a perilous quest that leads them from the foothills of the Himalayas to the steaming jungles of Polynesia, then on wards into the very heart of Don Gervase's insect kingdom...

Now now everyone. Let's just take a moment to SCREAAAAM!! I CAN'T BELIEVE I FINALLY FOUND THIS BOOK! I HAVE BEEN SEARCHING ALL OVER THE  GLOBE FOR THE OTHER TWO BOOKS IN THIS SERIES AND WHEN I FOUND THIS? AH! BLISS!

So I start this book expecting sooo much more and I was not disappointed. From the first chapter itself you are plunged into a roller coaster ride with unimaginable creatures and a plot that will make your head spin.

There are some bugs that are mentioned in this book which I hope do not exist. EVER.

Pearl is a great girl. I love her character just as much as I love Tom. They are the best pair ever. I love them both so much.
Sir Henry Scatterhorn and August Catcher are also beautiful characters. I really wish I had the brains to make something like what August made. Then I too would stuff taxidermy of birds with the encyclopedia. Who would need the internet right? You got a doubt? Just ask the talking bird with the encyclopedia in her head!
And of course I can' t forget the evil Don Gervase Askary and his daughter Lotus Askary. They are wicked! And the creatures that they harbour, their plans for the future... GAH! This book makes me wanna take entomology as a subject!

I am starting to love bugs. I know it sounds disgusting but I just want to study them, know more about them. There is a whole world out there filled with thousands of species of bugs! Who knows when they might take over the world.

There is the Elixir of Life and why Don Gervase Askary really wants to use it. I kind of felt sad for the bugs for their short life and all that but hey! bugs give thousands of eggs! If they lived longer they will totally populate the earth and rule over us! Eugh! They already have a higher population than ours.

Also this book reveals a lot more of the mystery that began in the first book (The Museum's Secret, a review which I have already done)

Trust me. You want to read this book. I know you do. This book will get you thinking things that you never thought were possible. And also this book will make you laugh a lot. Books rarely make me laugh so it is a big deal.

I have loved those funny scenes soo much that I want to share one with you. I will make sure that I don't give away the plot.

The hyena's eyes stared at them menacingly.
AAHHH!
Pearl screamed, Tom screamed, the driver screamed and all the monkeys screamed together. The driver slammed his foot on the brake, sending them all thudding against the windscreen, and the next moment the hyena bounced off the bonnet and tumbled down into the road. Struggling to its feet it stared at them angrily, then loped off into the shadows. For a moment the driver sat still, too stunned to speak. The two monkeys clinging to his steering wheel started to scream.

XD I laughed so hard at this moment. Chancellor has taken a classic scene and put into a situation that makes it hilarious!

I rate it a 5 for drama, comedy, adventure and mystery put all into one 500 pages book. Please read it! I promise you. You won't regret it. My friend loved it too! But if you like the kind of books that Beez reads (Teen fiction) then I doubt you would like it. But if you prefer mystery, adventure and the kind of thrill that makes you want to rip your hair off! Then go ahead and read it.

Lots of love & Beetles
Raven
(It's so ironic that Ravens eat beetles and I love them... but not enough to eat them)