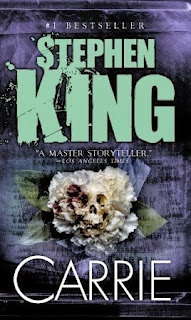 A novel by Stephen King

Summary: Stephen King's legendary debut, about a teenage outcast and the revenge she enacts on her classmates.
Carrie White may have been unfashionable and unpopular, but she had a gift. Carrie could make things move by concentrating on them. A candle would fall. A door would lock. This was her power and her sin. Then, an act of kindness, as spontaneous as the vicious taunts of her classmates, offered Carrie a chance to be a normal and go to her senior prom. But another act--of ferocious cruelty--turned her gift into a weapon of horror and destruction that her classmates would never forget.

I hadn't really planned on reading this book. Yes, lots of people love Stephen King and his horror books, but I had given up on horror books a long time ago. The one horror book that I had read didn't faze me a bit. I had even tried reading it at midnight, but nada. But this book? I tried my best to avoid reading it at night but after the end of the book I had nightmares.

Anyways, Carrie White is a bullied girl in Chamberlain. She has a good fashion sense and like every other girl she wants to be popular but it isn't possible because of her domineering ultra-religious mother, who makes up stuff about the things she does not like and goes around saying that it's written in the bible.

The story begins with Carrie getting her periods in front of the girls in the locker room. She is bombarded with sanitary pads and tampons by girls screaming her to "plug it up!" however, no one knows that it's her first time. She obviously knows about it but at the moment when she was being ridiculed like this she couldn't really think about what was happening. Just like this moment, there are many other moments where you have to think deep. It's kind of like poetry. The lines have been written but it's our job to figure out what it really means.

The characters are well expressed. These kind of characters make me want to think more about them. Even after the book was over, I kept thinking about them like they were real people. About what made them who they were and how their life would have been so different if they hadn't done the pig blood thing.

I absolutely love the ending. There is so much destruction that I was momentarily reminded of my favorite book-character-arsonist Jesse from My sister's keeper. But except for the fire there was no other similarity.

For this book to be really horrifying you need to have a great imagination and a silent surrounding. The imagination to actually feel the horror and the silence... so that you can be freaked out by the slightest noise.

Carrie is my first Stephen King book and I was kind of shocked when I realized that he had written this book waaaay before I was born!! Heck it is even before my mom was born!! And my dad must have been in elementary school. I can't imagine my dad in elementary, I wonder if he was a bully then... and I imagine that my mom was a flower in paradise if she wasn't born then. Hehehehe! Me so immature XD.

Back to the point. It is a great book. Maybe you will be scared and maybe you might not but that is no reason to not read an amazing book like this. I rate it a 4!