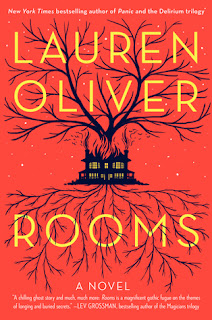 A novel by Lauren Oliver

Blurb:  Wealthy Richard Walker has just died, leaving behind his country house full of rooms packed with the detritus of a lifetime. His estranged family—bitter ex-wife Caroline, troubled teenage son Trenton, and unforgiving daughter Minna—have arrived for their inheritance.

But the Walkers are not alone. Prim Alice and the cynical Sandra, long dead former residents bound to the house, linger within its claustrophobic walls. Jostling for space, memory, and supremacy, they observe the family, trading barbs and reminiscences about their past lives. Though their voices cannot be heard, Alice and Sandra speak through the house itself—in the hiss of the radiator, a creak in the stairs, the dimming of a light bulb.

The living and dead are each haunted by painful truths that will soon surface with explosive force. When a new ghost appears, and Trenton begins to communicate with her, the spirit and human worlds collide—with cataclysmic results.

I went into this book without reading any reviews; I hadn’t even read the blurb. All I knew was that it had ghosts.

I was right of course. This book does have ghosts, two of them, Alice and Sandra. Alice is the oldest and Sandra is not so much (Sandra is the one with the dirty mouth). Needless to say they both have secrets they haven’t shared with each other.

The beginning of the book was a little hard for me to wrap my mind around. It starts off with the death of Richard Walker, husband of Catherine Walker and father of a teenage son, Trenton and a single mother, Minna. He left a will behind stating that the house would go to Trenton and certain amount of fortunes to both his wife and his daughter, but there also seems to be a third person who inherited his fortune. I thought the book would elaborate more on this third person but it didn't! This other person just seemed to me like a useless new character that was bought in just to torture the thought process of the dead mans wife.

Trenton had the role of any other teenager in an adult novel- whining. I just wanted to smack him sometimes. Minna was a sl*t who just had repressed feelings inside of her because she was never truly loved. Maybe she should have taken down the "I just met you and so let's sleep together because I don't give a cr*p about my little daughter who is just downstairs". I hated all the characters! I HATE THEM ALL SO MUCH.

This book introduces the ghosts and the Walker family and so many other characters at such a fast pace that I couldn't even remember the name of the characters until I finished the book.

Also, with so many POV's to keep a track of I couldn't connect with any of the characters. I felt zero emotions towards them, except one of the ghosts, Susan. Her constant cursing and joking around was a nice distraction from the not so nice writing of the book.

I don't know if it's just me or if someone else out there feels the same as me, but I dislike Lauren Oliver's writing. I had read Before I fall and it was a nice book and that's it. Just a nice book that I don't really want displayed on my shelf and wouldn't bother reading it again, ever.

After that I tried reading the Pandemonium series.

I gave up on the first book after reading two lines. I just cannot handle her style of writing. It bounces off of me. The words register in my head but they just remain as words, they refuse to transform into my personal movie.

However, I had picked up this book hoping I would fall in love with the ghosts (I was looking for a scary read) but it disappointed me because it was not even close to scary. It did not even creep me out. I've read a few reviews that say that this book made them feel watched in their own houses as the ghosts live and breathe in every part of the house, but I just felt ---'meh'.

So over all I rate this book with two Raven feathers and take a vow never to read any other Lauren Oliver YA or Adult books ever again. However, I'm really looking forward to reading her middle grade fiction books because they sound amazing and the cover looks awesome. For anyone who doesn't know, I'm a sucker for covers and recently I've been wanting to read some serious middle grade fiction. Don't ask me why. 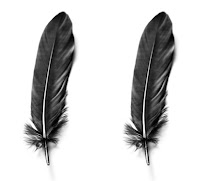