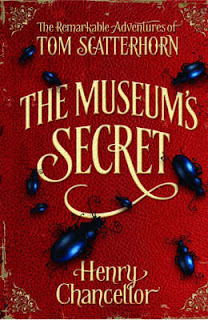 Targeted audience: 9 and above

Summary: When Tom Scatterhorn's eccentric father disappears to the Far East in search of rare beetles, closely followed by his mother, Tom is left to spend Christmas with his uncle and aunt, keepers of the weird and wonderful Scatterhorn Museum. But don’t get too excited – because it's a dusty, dingy place, full of tatty stuffed animals and rickety cases of junk. Nobody really wants to visit it anymore, and it looks as if its days are numbered.
But when Tom comes to live there, he finds more to the museum than meets the eye. The animals may be ragged and moth-eaten but they have an incredible secret – a secret that originated when the stuffed animals were first made, a hundred years earlier. And then Tom discovers he can go right back to the time of their making. . . .In an exciting adventure that threads in and out of time, from an Edwardian ice fair to the wastes of Mongolia to the jungles of India, Tom discovers that there is far more at stake than the fate of the museum...

WOHOHO! I don't even know where to begin.

The Museum's secret is the first book in the trilogy of The Remarkable Adventures of Tom Scatterhorn. The second is The Hidden World and the third being The Forgotten Echo.

The book captivates you from the first chapter with a beetle-hunting expedition and soon you are introduced to Tom's eccentric Aunt and Uncle.

The Scatterhorn family have owned the Scatterhorn Museum for as long as any one can remember. The taxidermy animals who used to be the attraction site are now moth-eaten and lying behind the glass impressing the dust collecting on the floor. But nobody knows the secret of this museum... the animals come to life at night!

I know that almost everyone would be like so what? The idea is pretty old, there have been movies on it already but the thing is that there is no watchman discovering it, it's Tom. An 11-year old boy. Now don't deny it but every person has at least once fantasized about a museum coming to life and when I was enlightened about the secret of the museum I couldn't resist reading on.

Henry Chancellor has taken that one thing that every kid has dreamed about and turned it into a bone-thrilling fantasy with an evil man named Don Gervase Askary and his daughter Lotus who will do anything to get their hands on the museum.

Since this is a review, I can't say all the exciting stuff that happens but just be ready to go on a world-wide adventure where the beauty of all the places have been explained with such details that you are forced to dream on going on a tour to all the places described. And also Tom discovers that he can go back in time! How cool is that? It's another one of my childhood (and present) fantasy.

A beautiful book that you have to read. I rate it a 4.5 and thank Henry Chancellor for making my childhood fantasy into such a great book!

Lots of love and pasta,
Raven
Posted by Unknown at 1:18 PM No comments: