Raven: Princess: A true story of life behind the veil in Saudi Arabia


A (hoax) novel by Jean Sasson 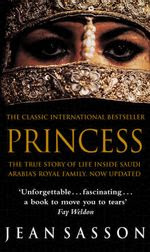 Summary: Sultana is a Saudi Arabian princess, a woman born to fabulous, uncountable wealth. She has four mansions on three continents, her own private jet, glittering jewels, designer dresses galore. But in reality she lives in a gilded cage. She has no freedom, no control over her own life, no value but as a bearer of sons. Hidden behind her black floor-length veil, she is a prisoner, jailed by her father, her husband, her sons, and her country.Sultana is a member of the Saudi royal family, closely related to the king. For the sake of her daughters, she has decided to take the risk of speaking out about the life of women in her country, regardless of their rank. She must hide her identity for fear that the religous leaders in her country would call for her death to punish her honesty. Only a woman in her position could possibly hope to escape from being revealed and punished, despite her cloak and anonymity.Sultana tells of her own life, from her turbulent childhood to her arranged marriage--a happy one until her husband decided to displace her by taking a second wife--and of the lives of her sisters, her friends and her servants. Although they share affection, confidences and an easy camaraderie within the confines of the women's quarters, they also share a history of appaling oppressions, everyday occurrences that in any other culture would be seen as shocking human rights violations; thirteen-year-old girls forced to marry men five times their age, young women killed by drowning, stoning, or isolation in the "women's room," a padded, windowless cell where women are confined with neither light nor conversation until death claims them.By speaking out, Sultana risks bringing the wrath of the Saudi establishment upon her head and te heads of her children. But by telling her story to Jean Sasson, Sultana has allowed us to see beyond the veils of this secret society, to the heart of a nation where sex, money, and power reign supreme.

Okay, I might be way too harsh with this review but that's only because I have never hated a book more than this one right here. So here goes my rant.

This book is said to be about Sultana (Not real name) who is a Saudi Princess and even though she belongs to the royal family she is bound by strict rules that define that women are only used for sexual relief and to bear the children for their husbands. And how they are enslaved by their fathers, husbands and brothers.

First of all, what kind of a person who belongs to a family of famous people would want such intimidate details of her life story (which is different than others, obviously!) to be written by a foreign author and available for publish in abroad? Secondly, how is it possible that when such details were put in a book for everyone to read, how did her family not find it out?

The facts in the book are obvious enough for anyone to understand that it's fake.


Fact #1: She said that she wasn't allowed to go into the mosque. Being a Saudi Princess she should have known that Mosques have a separate section for women.

Fact #2: It's said that women were forced to marry after puberty. I agree that women were (and in some places still are) being made to marry men right after maturation. But it was to avoid going around and having sex before marriage as doing that is unlawful in Islam. But but but I have heard that it's mentioned in the Quran (the holy book of Muslims) that it is the woman who gets to decide when and whom she wants to marry. Remember that it's always the humans who twist rules to fit their requirement.

Fact #3: Woman are given the highest respect in Islam. Women are told to cover themselves so as not to attract the attention of unwanted men but men are not even allowed to look at them with bad intentions as thinking of a bad deed is equal to doing one. And to support this fact, a quote from the Quran itself (translated of course): He who is best to his wife is the best man among you. (However, I agree that polygamy is allowed in Islam but I don't think that anybody in the modern generation follows that as everyone knows that it's difficult enough to handle the expenses and lectures of one woman)

Fact #4: Also a father who educates a minimum of three daughters has gained a palace in Heaven. This is another thing from the holy book that shows that education is not prerogative to women/girls.

There are many facts that I can go on about (like the one about piercing the vagina or something which is absolutely stupid and I think that the author has just made it up) but I just wanted to tell you guys that anyone who believes in this book and let's themselves be manipulated by it, Islam is not a bad religion. It has given it's followers many rules to follow but it's for their own advantage. Like listening to music and watching movies is not allowed in Islam, it's not forbidden but it's said so as to avoid any thing that takes one away from worshiping their God. I think it's the same for Protestants (I heard that like Muslims they too are supposed to cover their heads, not drink, not have sex before marriage, not worship images or idols of God, not listen to music or watch movies and not wear gold).

So this is what I had to say about this book. Since I hate this one so much I don't think I will be reading the other two that follow this one.

And I won't be rating this one since I have nothing to give it, but I won't be stopping you from reading it either. You can read it for yourself and understand that it's the biggest hoax ever.

Lots of hatred for the author but love and pasta for you guys,
Raven