A novel by Tom Cain 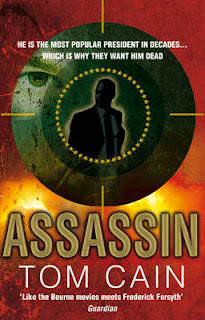 Summary: He is the most popular President in decades - which is why they want him dead
When a people-trafficker dies a violent death in Dubai, and a gangland money-launderer has a fatal car accident in San Francisco, both bear the hallmarks of a Sam Carver 'accident'.
The only problem is Sam Carver no longer plays that game. He made a promise. But someone is setting Carver up, framing him for crimes he didn't commit. And now his old paymasters at MI6 want him stopped.
A copycat killer wants to crush Carver, and then beat him at his own game by hitting the world's most prominent target, the new President of the United States.
Carver will have to use all his cunning and tradecraft to stop this deadly opponent. Alone and on the run, he must fight to clear his name - but first he must stop a fatal shot that will be heard around the world.

First off you need to know that Tom Cain is just a Pseudonym for David Thomas. And this book is the third in it's series (Samuel Carver Series) although I did not know that when I started reading it. (If I knew it I would have gone haywire to get my hands on the first and second book and only then continue)

I think it's because the author has included all the important facts that you need to know from the past books. And so you don't have to read from the beginning, you can just start up from any of the six books.

It's a great book to be read if you-like me-prefer to indulge in some thrill now and then. It has a lot of great action in it, a chase, moving in and out of danger and also an awesome story line,  Duh?!

There is not much to say about this book. However, there is one thing that I want to mention. It's that when the "copycat killer" has got his chance to kill Carver, he doesn't! I know! what the heck? I do understand that it's because the killer wants Carver to suffer before dying but why not just get it over with? But it's a stupid question of course. Because if Carver dies then this super awesome series would be over and I so would not want that.

Huh, So I guess it's true that the word 'so' is the hottest word after all (OMG I just began this sentence with 'so')

Anyways, I rate it a 3.8 and just so you know the six books in this series are- The Accident man, No survivors, Assassin, Dictator, Carver and Revenger (which was released last year)

Lots of love and pasta,
Raven
Posted by Unknown at 7:32 AM No comments: