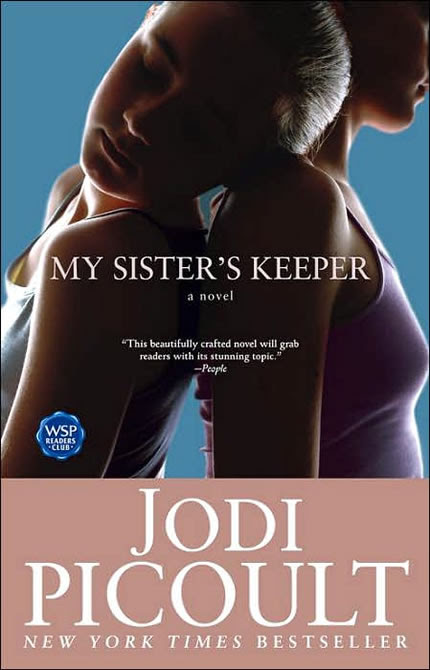 New York Times bestselling author Jodi Picoult is widely acclaimed for her keen insights into the hearts and minds of real people. Now she tells the emotionally riveting story of a family torn apart by conflicting needs and a passionate love that triumphs over human weakness.
Anna is not sick, but she might as well be. By age thirteen, she has undergone countless surgeries, transfusions, and shots so that her older sister, Kate, can somehow fight the leukemia that has plagued her since childhood. The product of preimplantation genetic diagnosis, Anna was conceived as a bone marrow match for Kate—a life and a role that she has never challenged...until now. Like most teenagers, Anna is beginning to question who she truly is. But unlike most teenagers, she has always been defined in terms of her sister—and so Anna makes a decision that for most would be unthinkable, a decision that will tear her family apart and have perhaps fatal consequences for the sister she loves.

My Sister’s Keeper examines what it means to be a good parent, a good sister, a good person. Is it morally correct to do whatever it takes to save a child’s life, even if that means infringing upon the rights of another? Is it worth trying to discover who you really are, if that quest makes you like yourself less? Should you follow your own heart, or let others lead you? Once again, in My Sister’s Keeper, Jodi Picoult tackles a controversial real-life subject with grace, wisdom, and sensitivity.

I am crying. Tears are pouring down my face, streaming, never stopping. All i can think is Anna Anna Anna. How could that happen? Why? How is this possible? Oh Anna! This book is so powerful, full of feeling and emotions. I cried when i saw the movie but not this much.

I think I have awarded you with enough ramblings of my grief stricken state(i had to delete a huge part of it).

My favorite character is Brian, Kate and Anna's dad. I like him because he saves people. He's a firefighter, which i have always thought cool and heroic. He goes in burning building and rescues people. He supports his family. He supports Sara even when he thinks otherwise. That may be seen as cowardice but its kind of necessary to have that supporting figure and he loves Kate too and him going against Sara would be like an act of betrayal. While Sara was all about Kate, Brian i think tried harder to be a dad to Anna and Jesse too. Though he had given up on Jesse, he was close to Anna. He is the pillar of the family. That strong pillar you can always depend on.
When he takes in Anna you can see that he is desperately trying to understand her part of the story. He knows its unfair to her, but he's torn apart.  Its a hard decision  While Sara always though in terms of saving Kate, Brian is trying hard to find out what he should do, who's side he should believe, he wants to be on both sides. He doesn't want Kate to die and He wants to give Anna a fair chance on life. He's heart broken when what happens to Anna happens. When all these years he had been tiring and cracking he finally broke.

The moment I loved most in this book was...
the moment Sara shaves her hair off for Kate. And Anna says, "Me next".
That part in my opinion is the cutest and sweetest and shows that the whole family is with Kate in her sickness. It also shows that Sara is ready to do anything for Kate. It shows that Anna also loves her sister and is close to her. I like the way Sara thinks("Well we can change that"). Its obvious Kate feels ugly since her hair is gone and Sara shows her that hair doesn't make you pretty, love does.
After that the trio walk in the mall (bald) heads held high, chins in the air, holding hands, proud to be them. Its written 'We are pretty, times three'.
It shows that love exists in all places. It shows that together you can get through anything. I thought this was the cutest and sweetest part.

Many a times the characters pissed me off. Especially Sara who never tried to see from Anna's Point of view. And Sara was also pretty ungrateful to her. She was all about Kate. There is a part in this book, when Anna has to give bone marrow to Kate. Anna loves her mom and calls for her. "It hurts" she says. But Kate in the other room is sick, so Sara is preoccupied. Brian gifts Anna with a necklace  But Sara just brings more morphine to reduce the pain, but what she doesn't understand is that there is another daughter who needs her, who needs to be appreciated, not told lies to and be treated like a spare part. Its unfair to Anna.
My least favorite character would probably be Sara. She is uncharacteristically selfish for a mother. I could not understand how she could stand herself, when she asked in front of everybody for Anna to only give away her kidney, that's all, last thing on the list. How can a mother possibly be like that??

The other character who pissed me off at times was Campbell. I like him, he funny and crazy in a way. But he's also an asshole.
I can totally understand that his epilepsy rocked his world, but it is seriously the lamest thing to say that you don't want the person you love to be tied down to you forever because of it. Love, if i know it, is supposed to want you to be with that person through anything and everything. He didn't think for one moment what Julia(i hate this name because of Life unexpected) would want, to stay with him. Because that's exactly what he would want if something happened to her.
Campbell is in major denial. He's snarky and always tries to be on the top of his game. I like that he and Julia get married in the end(sorry if i'm spoiling it for you).

Jesse.
Jesse's life is a collection of injustice done to him by the world, his parents and Kate's sickness.
So the outcome is obvious.
I feel sorry for Jesse. He was always neglected and never paid attention to(same thing). The only thing different in him is that he vents his anger and frustration by setting places(abandoned) on fire(how much ever Raven finds this cool I think its plain crazy). He lights fires and his dad cleans them up. Its his way of having power. Flames are beautiful and disastrous and even though he does the opposite of what his father does, he uses fire as his element and that makes him his father's son(I didn't know what else to write).

This is a book you should read once. And if you haven't seen the movie, watch it now, before reading the book because if you're anything like me you will detest the movie if you read it after the book. I could not watch more than 5 minutes after i had read the book.
While i might have liked this book, there are hundreds of people who won't. But to know that you'll have to read it. So if you're wondering whether to read it or not, I'm sorry I'm not being of any help. It kind of depends on your mood. If you want a book that's serious and keeps you stuck in thoughts of it but still affects you deeply or make you want to murder the characters the pick this book up.
But if you're in the mood for chic lit with sappy moments and lot of mother daughter moment and touchy feely moments then stay away.
My hands are feeling wobbly from typing so I'm going to stop now.

Lots of love and sleep(precious)
Beez.

My sister's keeper (As Beez said) is a book with lots of family moments. So, if you don't want to cry at the end of the book don't read it.

Anyways, MSK is about a thirteen year old girl who was genetically made by her parents for her older sister-Kate, who suffers a cancer that has no cure. Every step taken to save her only delays her death. If Kate is in need of WBC's (For those who have never touched their bio text books, it's short for white blood cells), blood, platelets (The thing in your blood that stops excess bleeding from a wound... Why exactly am I saying all this? It's not like anybody's gonna ask. God! What is wrong with me?!) or even an organ, the parents turn to Anna. Expecting her to give it without objection. But when Anna files a case with Campbell asking for medical emancipation, all hell breaks loose. (I just love saying that)

The part that appealed to me the most was (like Beez) the 'Lets shave our head off' part and also the... well if I say it then I would be ruining it for the other people out there. So let me just say that THAT part involves Brian and Jesse only. You will understand it... if you're bright.

Anyways, so my favourite character in this books is Jesse (Beez has already said so) simply because I can kind of relate to him. Any teenager who is left out and not given enough attention would probably end up like him (Not saying that I am like him as well). Involved in drugs, alcohol and in this case setting fire to abandoned buildings (Remember abandoned!). Even though he is the bad boy he isn't cold shouldered towards his sisters. He cares for them like any other big brother would. In fact, he cares for everyone but doesn't prefer to show it and this is the trait that I like the most in him.

I think everyone who likes reading books with special messages should read it. Cause this book gives a very important one: Don't give away your life just to be with the dying. Remember to love and treasure the ones that live with you as well.

I would give it a 4.5 for it's beautiful plot and characters with whom we can relate and connect with. But it loses it's 0.5 because of it's kind of random and abrupt talk about stars (But some of them made sense) and also for the weirdest/superficial reason ever behind Campbell and Julie's break up which made me and Beez go 'You have got to be kidding me!'

Posted by Unknown at 1:34 PM No comments: