A last installment of the perfect series by J.K.Rowling 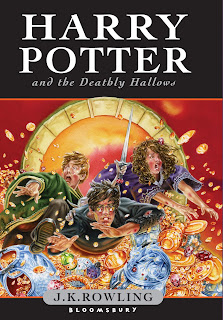 Summary: Harry Potter is preparing to leave the Dursleys and Privet Drive for the last time. But the future that awaits him is full of danger, not only for him, but for anyone close to him — and Harry has already lost so much. Only by destroying Voldemort's remaining Horcruxes can Harry free himself and overcome the Dark Lord's forces of evil.
In this dramatic conclusion to the Harry Potter series, Harry must leave his most loyal friends behind, and in a final perilous journey find the strength and the will to face his terrifying destiny: a deadly confrontation that is his alone to fight.


Ah! The last book of the series... It's the best. I was wondering (before reading it) about how she was going to put it up. I mean they are not going to school so which scenes would she put them in? And I was also wondering about when we will know more about Snape (Because almost everyone kept telling me that I will fall in love with him in the last book) and how is Voldy gonna die?

But they were all stupid questions of course cause this book had the most action and it was soooo awesome!

After reading it, I fell on my bed and just stared at the ceiling for hours. I could not believe that it was finally over. All the characters mean so much to me now, that I am done with the books and the movies.

I must say that I have fallen for Snape. He was just such a beautifully portrayed character.

I am so obsessed with it that I have filled almost ten pages of my scrap book with pictures related to harry potter.

I was also emotionally high (which barely happens to me) and I could not sleep at night. And at one of these times I discovered that Diagon Alley is actually from Diagonally! Maybe some people out there already know this but when it struck me I was like, Wat?! *Another Salute to J.K.Rowling*

I am telling you guys out there, this is the best book ever. J.K.Rowling wrote it all in seven books because she wanted us to be so connected with the characters that we cry for them at the end (which did happen).

I rate it 5 on 5 again because it's just the best book ever.

Posted by Unknown at 6:06 AM No comments: