Raven: The Girl who kicked the Hornets nest

A magnificent novel by Stieg Larsson 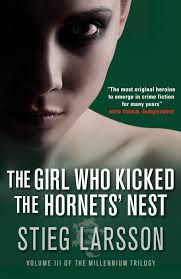 Summary: Lisbeth Salander—the heart of Larsson’s two previous novels—lies in critical condition, a bullet wound to her head, in the intensive care unit of a Swedish city hospital. She’s fighting for her life in more ways than one: if and when she recovers, she’ll be taken back to Stockholm to stand trial for three murders. With the help of her friend, journalist Mikael Blomkvist, she will not only have to prove her innocence, but also identify and denounce those in authority who have allowed the vulnerable, like herself, to suffer abuse and violence. And, on her own, she will plot revenge—against the man who tried to kill her, and the corrupt government institutions that very nearly destroyed her life.
Once upon a time, she was a victim. Now Salander is fighting back.

This book is the BOMB! Even though I was slightly disappointed with how it all turned out. I guess after Larsson's first two books I just thought that this one would be more action packed and more... thrilling. I mean it was thrilling but not how much I had expected it to be. It was set on a pretty slow pace. This book could have been completed in 400 or so pages if Larsson had not extended everything.

It has a great plot though. I love the way everything makes sense by the end. Lisbeth's back story is amazing. And I absolutely love the newspaper and magazine thing in the book. I guess after Jeffrey Archer's book-The Fourth Estate- I have always loved the intense tension in the media. Also, the fact that Millenium (The name of the protagonists-Blomkvist- magazine) runs in the hands of a handful of people is just amazing.

My favourite character, without doubt, is Lisbeth Salander. The heroin with a photographic memory, a horrifying past and a computer hacker. It's just that the word pirate and hacker, even if they are bad they seem, sound and appear awesome!

Blomkvist is also a great character but the fact that all ladies like a man above forty with a kind of big belly is annoying. His curiosity to find out things about Salanders past to remove the charges slapped on her is what I like about him. I mean if it wasn't for him, Salander would just be ignored and put into a mental hospital. Again.

Coming back to the plot. It's highly annoying to read the names of places in Sweden. I mean what kind of a person even made those names? Even the character names are annoying. I always get confused between Bjorck (I think it's pronounced Bork like pork)  and Burman.

The thing I absolutely loved is how the women in these books are portrayed as strong and independent.

And there is one more thing I want to mention. Almost by the end of the book the author is going to mention how one guy took a pic and it wins picture of the year award. I mean it was only a picture of a person with a bewildered face! And I bet he wasn't even handsome. Da fudge??

And there are parts in the book where the Author has written what the character did, like wake up and fry egg and eat toast with a glass of blah blah. It's not even necessary for us to read all that but for some reason I like to read those parts. Makes me feel more connected to the character and makes the characters look like real people and not some imagined character.

The characters in this book are as real as real can be... except for the fact that all women like Blomkvist (Except Modig. I absolutely love her for that) and that women who have enormous biceps look attractive (at least that's what Blomkvist thinks). The love (or shall I say sex) life of these people is so bizarre. It cannot possibly happen in reality... right?

Anyways, I suggest anyone who is above sixteen to read this book. It's a great mystery novel. The kind which you cannot put down. However, if you are planning on reading this book (I am talking about this particular book) then don't read it. Go to your library or book store and get The Girl with the Dragon Tattoo first because that is where it all begins. Then go for The girl who Played with Fire and then and only then should you read this book. (You also need a great brain to keep up with the pace of these books and the amount of characters that are introduced to you. Everyone mentioned has a role to play.)

I rate this book a 4.2 only because it wasn't up to my expectation (Don't you see? I have rated it a 4.2 even though it didn't reach my expectations which means that you should totally read it!!) but if you want me to rate the earlier two installments, then I rate them a 4.8 each. Yup, I loved it that much. It's a pity that Stieg Larsson died before he could see his books become a sensation. I would have loved to read more of his works.