Raven: The Son of Neptune (The Heroes of Olympus #2)


A novel by Rick Riordan 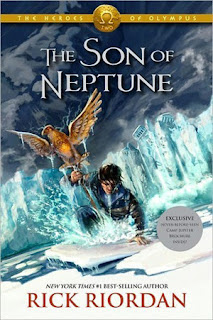 Summary: Seven half-bloods shall answer the call,
To storm or fire the world must fall.
An oath to keep with a final breath,
And foes bear arms to the Doors of Death.
Percy is confused. When he awoke from his long sleep, he didn't know much more than his name. His brain fuzz is lingering, even after the wolf Lupa told him he is a demigod and trained him to fight with the pen/sword in his pocket. Somehow Percy manages to make it to a camp for half-bloods, despite the fact that he has to keep killing monsters along the way. But the camp doesn't ring any bells with him. The only thing he can recall from his past is another name: Annabeth
Hazel is supposed to be dead. When she lived before, she didn't do a very good job of it. Sure, she was an obedient daughter, even when her mother was possessed by greed. But that was the problem — when the Voice took over her mother and commanded Hazel to use her "gift" for an evil purpose, Hazel couldn't say no. Now because of her mistake, the future of the world is at risk. Hazel wished she could ride away from it all on the stallion that appears in her dreams.
Frank is a klutz. His grandmother says he is descended from heroes and can be anything he wants to be, but he doesn't see it. He doesn't even know who his father is. He keeps hoping Apollo will claim him, because the only thing he is good at is archery — although not good enough to win camp war games. His bulky physique makes him feel like an ox, especially infront of Hazel, his closest friend at camp. He trusts her completely — enough to share the secret he holds close to his heart.
Beginning at the "other" camp for half-bloods and extending as far as the land beyond the gods, this breathtaking second installment of the Heroes of Olympus series introduces new demigods, revives fearsome monsters, and features other remarkable creatures, all destined to play a part in the Prophesy of Seven.

Ah! Another one of Percy Jackson's book. If there is anyone out there who does not prefer reading Rick Riordan's books then SUE YOU! Cause you are missing out a LOT in life!  There are Greek and Roman Gods waiting for you out there. All you gotta do is open the freaking book!

Okay, back to the review. Rick Riordan has done it again! A fantabulous book that will keep you at the edge of your seat. It's a page turner. It will make you feel so jittery that you can barely hold yourself away from the book.

Percy has lost his memory and the book begins with him fighting off two gorgons who work as saleswoman at a Bargain Mart. His way to escape them AND get his memory back is by carrying a hag on his back. Yup, you will start laughing from the beginning.

Percy enters a safe haven for Romans called New Rome with the hag on his back and Frank and Hazel, the guards of New Rome, fighting against the gorgons. Turns out that the hag was actually Juno (Hera), the wife of Jupiter (Zeus).

Now Hazel is the daughter of Hades and has the power of navigating underground tunnels and popping precious-cursed-gold from the ground. She also happens to be... wait for it... NICO DI ANGELO'S SISTER!!! Yup he is back!

Frank is accepted by his father after he wins the game called Siege (It is kind of like Capture the flag) His father happens to be Percy's most-hated-God. (If you are an ardent fan of Percy Jackson you should know) and this Percy's-most-hated-God gives them a quest:
Go to Alaska. Find Thanatos and free him.Come back by sundown on June twenty-fourth or die.
(Yeah, he is a no nonsense person.)

And so the three of them go on a quest to Alaska to free Thanatos (the hawt god of death) from Alcyoneus (Gaea's giant son-the bane of Pluto) Now on their way they meet the cool Amazons, a smart harpy named Ella, the coolest horse in the world (Arion) and Frank's cool grandma.

The ending of this book turned me into a snake. Seriously... I was writhing all over the floor because I wanted to read what happened next! Yet again! Riordan leaves a Cliff hanger at the end! I was this close (shows picture of an atom) to ripping off my hair in desperation. I had to calm myself with a lot of deep breaths.

So this is all I'm telling you. The rest is for you to find out. Are they able to free Thanatos? What are Hazel and Frank hiding? What is Frank Zhangs history? Does Percy ever get his memory back? Will the Romans accept him if they find out that he is Greek?

Here are a couple of excerpts from the book:
Hera: You are the glue that unites the seven.
Percy: Great! I always wanted to be glue.

And here is another one:
Percy wondered what the mortals saw through the Mist. Maybe they thought that the harpies were pigeons and the weapons were lacrosse sticks or something. Maybe they just thought the Thai mac and cheese was so good it needed an armed escort.

In both the above cases I had to shut the book and calm my hysterical giggles before continuing.

I can't wait to read The Mark of Athena. This book deserves a 5.

Lots of love & Gold Nuggets
Raven
Posted by Unknown at 8:43 AM No comments: