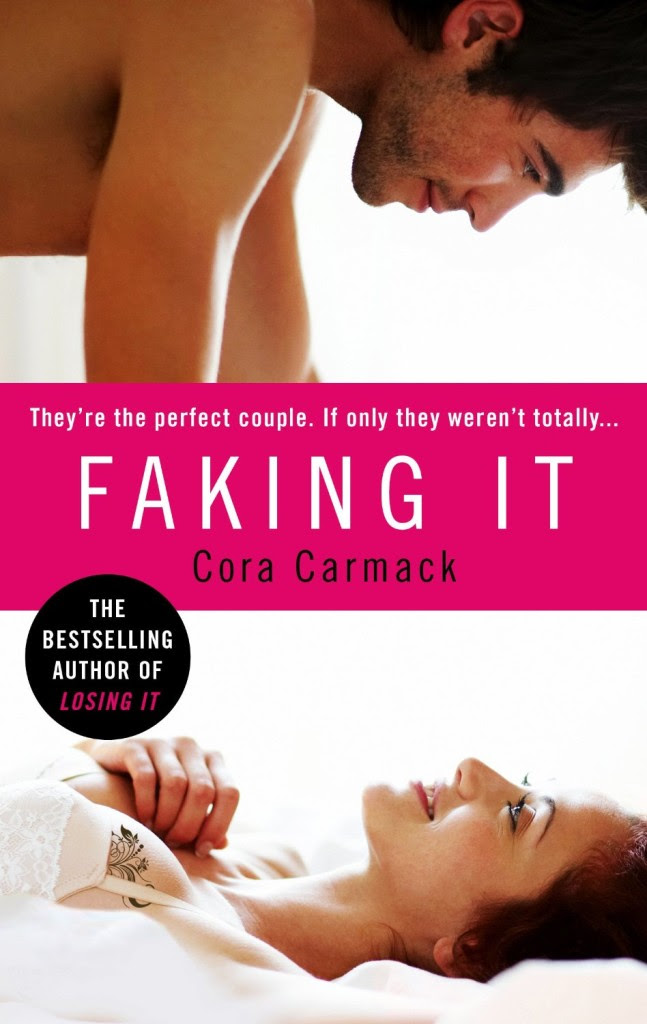 Mackenzie “Max” Miller has a problem. Her parents have arrived in town for a surprise visit, and if they see her dyed hair, tattoos, and piercings, they just might disown her. Even worse, they’re expecting to meet a nice, wholesome boyfriend, not a guy named Mace who has a neck tattoo and plays in a band. All her lies are about to come crashing down around her, but then she meets Cade.
Cade moved to Philadelphia to act and to leave his problems behind in Texas. So far though, he’s kept the problems and had very little opportunity to take the stage. When Max approaches him in a coffee shop with a crazy request to pretend to be her boyfriend, he agrees to play the part. But when Cade plays the role a little too well, they’re forced to keep the ruse going. And the more they fake the relationship, the more real it begins to feel.


Let me be honest. I did not finish this book. It is totally cliche. Guy is hung up on best friend who's getting married to someone else. Meets girl- wild, failing music courier, beautiful, different and has boyfriend. But poor girl needs pretty boy to ____ parents for money. Of course, pretty boy agrees. Angry girls parents love him.  Even though they are pretending, pretty boy is utterly smitten and angry girl doesn't admit it but shots of electricity fly when he touched her. They share few secrets, connect, he watches her bare her soul and some magic happens. Then they do the "deed". Pretty boy is willing to do anything. But angry girl shoves him in a wall. Alas! she still needs him. -i stopped reading her, but i can tell you exactly what happens next- Lots of stammering apologies, admitting it was a mistakes, pretty boy's hurting all over again. Thick chemistry in the air. Angry girl just wants to forget but she needs him, her reasons now different then before. Situations change, they are forced into everything together. Neither of them can handle it but to each other they look like they are way past it. "Accidentally" some heated kisses happen. Now, last thing in this stew, rest will happen on its on. Distance. Angry girl finally admits she's over in love and pretty boy returns made up mind that he will pretend she does not exist to find- angry girl waiting for him on his doorstep....

Total cliche.
Not that i didn't like it. 2 years ago i would have died over this book. I still am a sucker for them. But why i didn't like this book - Cade aka pretty boy. He's a nice guy, selfless, kind, very cute and in all your average good guy. What i din't like is how in the start of the book he was so pathetically in love with his best friend. Looking at her with puppy dog eyes, so not over her. Guys are strictly not sappy creatures. Then when he meets Max, he agrees to act like her boyfriend to her parents for- a date! That's it. Max's boyfriend literally fled when he heard her folks were coming down. But he simply agrees, only for a date. Fast forward to after the acting- Cade has been persuaded to come to a bar by flirty one-night-stand-kinda-guy Milo (tell me which guy in his right mind has to be persuaded to come to a bar with tons of girls- guys live for that such of a thing). Then a pretty blond attaches her to him and he feels nothing- no remote interest although he notices Max from across the room! There is a sexy blond on his arm clearly into him and he does not notice her! Lets be bland, guys are all about sex, they can't really say no to it(can't say no by Conor Maynard).  So as much as i like Cade i can't help but find his character ridiculous.

Now the good part- I like Max. She is full of this bursting anger and energy, so combustible. She wild and not afraid. And even though she is constantly in denial as far as Cade is concerned its human, i can imagine anybody being afraid of falling in love, putting herself out there and taking a risk of getting hurt. She's full of a vibrant energy and gives out that mysterious, shimmering, disappearing girl vibe. I'd like to think that in the future i have her personality, i mean who can refuse a "who's that girl?" kind of girl, even Cade can't.Another thing i like is how this book is written- its's visual and very real. It makes the whole cliche'd fantasy seem so real and fairy tale-y.

So my verdict. I'd say if you're into dreamy stuff and are a sucker for good guys falling for bad girl stories and want to cuddle up with some warm and other feelings- go for it. However if you're prefer more realistic stuff and get very exasperated at exaggerations and shots of electricity stay away- unless of course you're in a very bad mood and want to get out some wicked "really?" laughs.And lastly, if you're a girl in desperate need of unrequited love from an inanimate object, don't hesitate.;)

Lots of love and sex
Beez.

Posted by Unknown at 3:50 PM No comments: