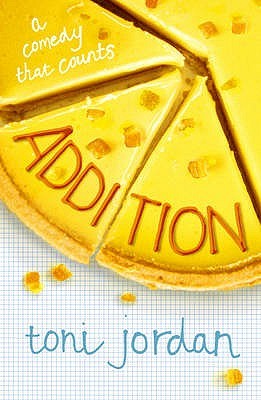 Grace Lisa Vandenburg counts.
The letters in her name (19). The steps she takes every morning to the local café (920); the number of poppy seeds on her slice of orange cake, which dictates the number of bites she’ll take to finish it. Grace counts everything, because numbers hold the world together. And she needs to keep an eye on how they’re doing.
Seamus Joseph O’Reilly (also a 19, with the sexiest hands Grace has ever seen) thinks she might be better off without the counting. If she could hold down a job, say. Or open her kitchen cupboards without conducting an inventory, or make a sandwich containing an unknown number of sprouts.
Grace’s problem is that Seamus doesn’t count.
Her other problem is… He does.
Addition is a fabulous debut novel. Grace is witty, flirtatious and headstrong. She’s not a bit sentimental but even so, she may be about to lose track of the number of ways she can fall in love.

In the past 24 hours that I have spent reading this book, Grace Lisa Vandenburg (19) has taken over my mind. Grace with her ocd, her craziness and obsessions and quirks.
Addition is about Grace, who has a serious case of ocd of numbers and how she falls in love and lives.
In my mind I see Grace with her head busy spinning with all the numbers and those million thoughts of hers, along with Nikola and Seamus with his long and sexy fingers and adorable Larry....
Grace is such an amazing character who is crazy in all dimensions.
What Grace does is counts. She counts everything so her whole world is encompased in those numbers and those numbers give her the sense of safety and security. She counts because she cannot stand not knowing the numbers.
If Grace were here she would know the number of things on my to do list, the mirrors on my pouch, the number of the line I'm currently writing, the number of things currently on my table, the number of books stacked in the pile to my left, the number of leaves on my glass holder, the number of paper planes flying on my skyline sticker etc.....
The reason (I think) Grace counts so much is because she likes to be in control in her own way. In the same way that some people cannot stand having a thing out of order or stand even the thought of the germs on their hands (ocd), Grace can't stand not knowing the numbers.

Her whole life is structured on numbers. A lot of people have this but only a fraction of what Grace has.
I for one cannot stand if the volume of anything is not a multiple of ten. Loads of people have this. I eat nuts in tens and if i add one more I have to eat nine more. If I want to start doing something I wait till the time is a multiple of 5 and if I'm even a little late, I have to wait for another 5 minutes. Sometimes I count the number of steps I take. The other day I was counting the number of people I saw with plaits (I lost count after 30).

Just like me everyone has these tendencies. But suppose I'm late for something and the time isn't a multiple of 5 it doesn't mean I won't start. I'll shut the part of my brain so bothered by it and do my work!
Every time our teacher rubs the board and leaves a spot unclean my head bursts and I try to erase it with my telekinetic powers but I don't have a panic attack or burst into tears!
But not Grace.
If Grace remembers that she doesn't know the number of bristles on her tooth brush she's going to drop everything and count them till she gets it right.
That's just Grace.

In this book, Grace counts so much and does everything in numbers or knows every number that it is exhausting!

This book, sucked me in and I haven't been able to stop reading it since. I'm probably going to reread it.
This one was definitely a book of a kind and a really special one. Not everybody's cup of tea but an amazing whirl wind. Why, i think you should pick it up right now and give it a go!