Raven: The House of Hades (The Heroes of Olympus #4)


An incredible novel by Rick Riordan 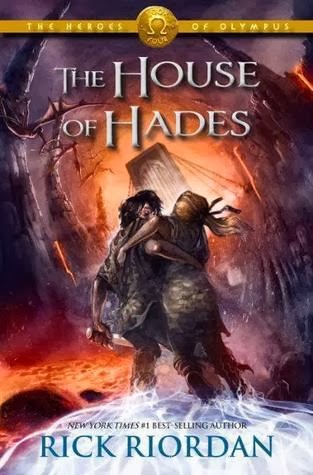 Summary: At the conclusion of The Mark of Athena, Annabeth and Percy tumble into a pit leading straight to the Underworld. The other five demigods have to put aside their grief and follow Percy’s instructions to find the mortal side of the Doors of Death. If they can fight their way through the Gaea’s forces, and Percy and Annabeth can survive the House of Hades, then the Seven will be able to seal the Doors both sides and prevent the giants from raising Gaea. But, Leo wonders, if the Doors are sealed, how will Percy and Annabeth be able to escape?
They have no choice. If the demigods don’t succeed, Gaea’s armies will never die. They have no time. In about a month, the Romans will march on Camp Half-Blood. The stakes are higher than ever in this adventure that dives into the depths of Tartarus.

*High-pitched squeal* THIS BOOK! Oh good lord! This book is the bomb! I mean when I saw it, I squealed so hard. I was fangirling alongside reading it. It's almost a 600 page book and on a general basis it should have taken me at least two weeks to finish it but I finished it in 3 days. THAT'S HOW HYPER I WAS!

Okay okay enough of the fangirling. I can't really write a review as such cause there are sooo many things happening in this book. But basically it is all character development.

We get to see so many different angles to every character! There is a new layer unfolding as we turn every page. Percy and Annabeth's journey in Tartarus was just wow! I mean it was described in such a good way that it actually gave me the chills. And there were loads of Percabeth moments! <3 I just love them both together. Plus all those enemies they faced. Wow just wow...

Bob was the cutest and the most adorable character in this book. He made me cry at the end.

Piper went through a major development. When she was charm-speaking Khione I was literally at the edge of my seat biting my finger off in anxiety. *Slow-applause*

Hazels new power is hella awesome! I loved it. She and Frank are meant to be! I ship them! Oh and Franks development was just *insert dropped jaw* He just... argh! He just went commando! I love him! I loved him before and I still love him. I love that line he says "Pain was unimportant. Failure was unthinkable." It's engraved in my memory.

Leo also under went such a HUGE character development! It's like he has a purpose now. I am so glad that Rick Riordan finally got him together with a great girl... well not really together but yeah... I SHIP CALEO!!

NICO: His confession... assdfgfhja! I just can't take it! I was so torn when he confessed. I felt like my heart was ripped out. I stopped reading and screamed into my pillow. That's how big his confession was. It was like... OUT OF THE FREAKING BLUE! And I absolutely loved it! Would not have it any other way.

Jason... well he didn't change much.

But overall, I loved it. There is such a different tone to this whole book. I mean there is humor of course but there is this underlying tragic tone. All the characters have a kind of sadness in them that you only get after losing someone. Gosh! I can't wait for the last book! I can't imagine how it will all end. I mean it's Rick Riordan! You can never predict what he does.