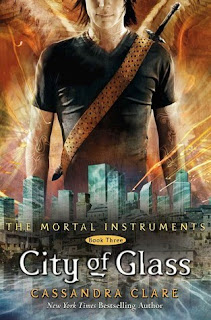 Summary: To save her mother's life, Clary must travel to the City of Glass, the ancestral home of the Shadowhunters - never mind that entering the city without permission is against the Law, and breaking the Law could mean death. To make things worse, she learns that Jace does not want her there, and Simon has been thrown in prison by the Shadowhunters, who are deeply suspicious of a vampire who can withstand sunlight.
As Clary uncovers more about her family's past, she finds an ally in mysterious Shadowhunter Sebastian. With Valentine mustering the full force of his power to destroy all Shadowhunters forever, their only chance to defeat him is to fight alongside their eternal enemies. But can Downworlders and Shadowhunters put aside their hatred to work together? While Jace realizes exactly how much he's willing to risk for Clary, can she harness her newfound powers to help save the Glass City - whatever the cost?Love is a mortal sin and the secrets of the past prove deadly as Clary and Jace face down Valentine in the third installment of the New York Times bestselling series The Mortal Instruments.

Clary needs to revive her mother from whatever spell she's under and to do so she needs to find the Warlock-Ragnor Fell. The Warlock resides in Alicante (The City of Glass) and Clary decides to go there with the Lightwood family and Jace through a portal, and that's where things go terribly wrong.

Instead of Clary, Simon ends up in Alicante and Simon being a Downworlder and all. Yeah, he was not so welcome.

Clary, however, does find her way to the city of glass and meets Sebastian. Something about him sounds warning alarms all over her head. There is something definitely dark about him but he seems so sweet. Clary is confused. Not to mention that her relationship with Jace is bordering between weird and cliche. That's my opinion on it. To be honest, I find Alec and Magnus' relationship waaay better than Clary and Jace's. (There is little treat for all the Alec and Magnus lovers in this book)

Jace and Clary find out more about their past, some good and some bad secrets bob up to the surface.

Valentine has declared war over Alicante. He with his Demon army plans to control all of the Shadowhunters and obviously destroy all Downworlders. Shadowhunters don't stand a chance against Valentines army but maybe if they join hands with the Downworlders, they might just win. But will they?

Valentine is so ruthless and wicked in this book, that I have fallen in love with his iniquitous ways (Call me psych, but it's true) He just seems like a royal arse who just flaunts his evilness. I love it.
Valentines true aim from the first book has been to acquire the three mortal instruments. After having already gotten The Mortal Cup and The Mortal Sword, all he needs now is The Mortal Mirror.

So this is the whole plot of the book without any spoilers (Yes, yes you can bow to me now)

I have mixed feelings about this book. Sure it had some great moments but way too  many cheesy lines for me to digest. Many so-called-suspense had obvious outcomes and I didn't like the way the characters reacted to some of the situations. For example, Isabelle just goes through a huge emotional instability after attending a funeral and what makes her feel better? Intimacy. I had felt absolutely disgusted at this point.

But yes, everything has been finally explained in this book. NO cliffhangers and it had one of the best climax scenes. I am looking forward to the next book in the series (City of Fallen Angels) I would give this book 3.75 stars (It loses it's stars for the oh-so-cheesy scenes and not-so-suspenseful suspenses)

Lots of love and Pasta
Raven

Posted by Unknown at 9:17 AM No comments: