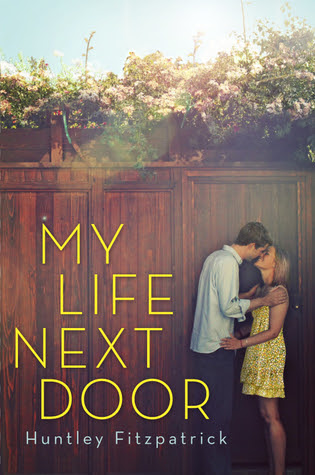 "One thing my mother never knew, and would disapprove of most of all, was that I watched the Garretts. All the time."
The Garretts are everything the Reeds are not. Loud, messy, affectionate. And every day from her rooftop perch, Samantha Reed wishes she was one of them . . . until one summer evening, Jase Garrett climbs up next to her and changes everything.
As the two fall fiercely for each other, stumbling through the awkwardness and awesomeness of first love, Jase's family embraces Samantha - even as she keeps him a secret from her own. Then something unthinkable happens, and the bottom drops out of Samantha's world. She's suddenly faced with an impossible decision. Which perfect family will save her? Or is it time she saved herself?
A transporting debut about family, friendship, first romance, and how to be true to one person you love without betraying another.

This is the type of book you can absolutely never not like. Its got its own share of cute(George) and crappy(mom) moments. It's how one summer a girl falls in love with the boy who lives next door but might as well be living in a different world. It's a very sweet story that makes you feel all romantic-y. And the best part is that Sam falls in love in a falling-in-love way. Its not just BAM in your face. It has all those bits of first love- the first kiss, the awkward an silly moments, the small misunderstands after which they make up(and make out), and the heartbreak moment(I got a little teary eyed).

Jase Garrett is the charming and handsome gentleman that Samantha falls in love with. His family(8 kids + 1 more on the way) reminds me of the family in 'Cheaper by the dozen'. There's always something happening. Its filled with hustle bustle and crashes and screaming and wailing(interesting choice of words Patsy). Its the most fun kind of family who's always lively and bursting with energy. Its also the kind of family that everybody looks with the how-do-you-do-it-? look. But Jase is not ashamed at his family at all. Its a part of him.

Unlike Sam's family who consist of an all girl team with Mom and 2 daughters(Sam's the youngest). Samantha's mom is a control freak, hence the load amounts of vacuuming. She also does not like the Garrett's if only because their large children population and their messiness due to the former reason. She pisses me off.

Samantha is quite the character  She has always looked out of her window and seen the Garrett's life. She doesn't admit it but she likes it. Its so different from her own. But that's what she lets it be, the world outside her window. She's a good girl, unlike her older rebel sister, has got a few jobs for the summer and takes SAT classes to accompany her friend. She has sort of a dull life, nothing new or great. Until she meets Jase. Or Jase meets her. From there its all dreamy, their first kiss, falling in love, the process of deflowering(for both). From the girl who watched from the sidelines she was now a part of them. But when something happens(not telling) it rocks her world and she is in the state of dire confusion and despair. When it happens he loses all her hope and became a fictional version of me- lazing everyday and every moment on bed, doing nothing, just moping around. But i shall promise you i has a perfectly happy ending.

This paragraph is devoted to my favorite character George as in cute, 4 year old George brother of Jase.
He is soo adorable and cute and made me laugh like a crazy person. He has so many questions in that mind of his and immediately likes Sam. He calls  her Sailor Supergirl(sorry if i'm ruining this for you).

“Um. So ... Are we going to study?"
Jase slides his thumbs behind my ears, rubbing the hollow at their base. He's only inches from my face, still looking into my eyes. "You bet. I'm studying you.”

“Is Jase already gonna marry you?”
I start coughing again. “Uh, No. No, George. I’m only seventeen.” As if that’s the only reason we’re not engaged.
“I’m this many.” George holds up four, slightly grubby fingers. “But Jase is seventeen and a half. You could. Then you could live in here with him. And have a big family.”
Jase strides back into the room, of course, midway through this proposition. “George. Beat it. Discovery Channel is on.”
George backs out of the room but not before saying, “His bed’s really comfortable. And he never pees in it.”

Now tell me, do i need to convince you to read it??

Posted by Unknown at 4:47 AM No comments: