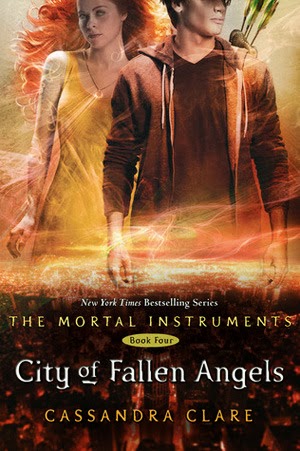 
Summary: The Mortal War is over, and sixteen-year-old Clary Fray is back home in New York, excited about all the possibilities before her. She’s training to become a Shadowhunter and to use her unique power. Her mother is getting married to the love of her life. Downworlders and Shadowhunters are at peace at last. And—most importantly of all—she can finally call Jace her boyfriend.
But nothing comes without a price.
Someone is murdering Shadowhunters, provoking tensions between Downworlders and Shadowhunters that could lead to a second, bloody war. Clary’s best friend, Simon, can’t help her—his mother just found out that he’s a vampire, and now he’s homeless. When Jace begins to pull away from her without explaining why, Clary is forced to delve into the heart of a mystery whose solution reveals her worst nightmare: she herself has set in motion a terrible chain of events that could lead to her losing everything she loves. Even Jace.
The stakes are higher than ever in the #1 New York Times bestselling fourth installment of the Mortal Instruments series.

Now before I begin. I never planned on reading this book. I was done after City of Glass but then Beez told me that this book has a very shocking ending and so I read.

I don't know why there are soo many people who absolutely hate this book. I mean yes of course you have the usual hot shot, the "Simon", the girl who is helpless and is used as leverage throughout the whole series but besides that I think there is a good plot. Honestly I do.

*If you haven't read the last book then don't read further*

After the death of Valentine in City of Glass and the missing body of Sebastian I was sure that in this book, by some freak of nature, Sebastian will return... but something absolutely unexpected happened. That was one thing I liked in this book.

The second thing I really liked was Simon being stuck between Maia and Isabelle. Ha! Those times I felt so sorry for Simon.
Simon went through a character development I think. He has more knowledge about the Downworlders and we get to see The Mark of Cain in action.
Plus he does something that was uncontrollable but terrible nonetheless.

Now keep everything aside and let us talk about... Alec and Magnus!! Damn! I ship them so hard! I love the Malec parts the most. Alecs jealousy and Magnus trying to make it up to him *squeling* I know I have lost it but eh! Whatever. I guess you could say that I read the Mortal Instruments to have more of them.

I was disappointed that Jocelyn and Lukes marriage wasn't given much of an importance.

I loved the villian... mostly because... well I cant exactly tell why. Go figure it out yourself.

And that's basically everything. There are a few new characters introduced. We get to meet Simons band and meet Maias past.

I look forward to reading the next book in the series. I have heard that she will be starting another series with the same shadow hunter theme after the release of City of Lost Souls and I never want to read that series because I do not like it when authors stretch a series. It is one reason why I never read Vampire Diaries (Well, I read only the first book and saw the first 3 episodes of season 1... that's all)

But of course if J.K.R decides to write more Harry Potter then WOOHOO!