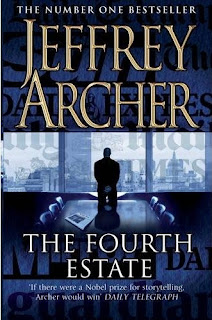 Publisher: HarperPaperbacks
Pages: 742
Target Audience: Anyone and everyone

Summary: Lubji Hoch survived World War II on luck, guts, and ruthlessness. At the war's end, renamed Richard Armstrong, he buys a floundering newspaper in Berlin and deviously puts his competitors out of business. But it isn't enough. Meanwhile, on the other side of the world, Keith Townsend, the Oxford-educated son of a millionaire newspaper owner, takes over his family's business. His energy and brilliant strategic thinking quickly make him the leading newspaper publisher in Australia. Still, he longs to move on to the world stage.
As both Armstrong and Townsend seize control of everything they see, their ambitions collide on a global scale. But suddenly they both find themselves threatened by financial disaster and enormous debt. Frantic to save his crumbling empire, each man turns desperate. One's quest will lead to triumph, the other's will end in tragedy in this awesome tale of wealth and corruption, desire and destruction.

This is another one of Jeffrey Archers great books but if you have read A Prisoner of Birth before then I don't think this will interest you. It is not as fast paced as his other books that I have read. The thing that reeled me into this book was the rivalry among newspaper companies. I had never given a second thought to the way the newspaper industry works but if it's anything like this book then it must be one hell of a roller coaster. It's got humor in the most unexpected situations which makes the reading fun.

I liked the female characters that accompany the protagonists. They are smart, cunning and beautiful. This is also another reason why I love reading Jeffrey Archer books, he never degrades women by insulting them or making fun of them. He portrays them as someone who are smarter than men. Love you Mister Archer!

I rate this a 3.5 because compared to his other works, I know he can do better.