Anna is looking forward to her senior year in Atlanta, where she has a great job, a loyal best friend, and a crush on the verge of becoming more. Which is why she is less than thrilled about being shipped off to boarding school in Paris--until she meets Étienne St. Clair. Smart, charming,beautiful, Étienne has it all...including a serious girlfriend.
But in the City of Light, wishes have a way of coming true. Will a year of romantic near-misses end with their long-awaited French kiss?

Paris. The city of love. Add an american boy with an english accent, perfect hair and oh-so-sexy name. Equals to a mini version of heaven for any girl on this planet. But not for Anna who feels abandoned by her parents in SOAP(“Soap?"
"School of America in Paris" he explains. "SOAP".
Nice. My father sent me here to be cleansed.” ).
I bet your laughing out loud now. And yes, if you're wondering there are many more hysterical moments in this book.

Back to the story, so Anna feels all lonely and miserable and home sick since she left her best friend, almost boyfriend and her life back in America. Till she crashes(collides, bumps, whatever) in to Etienne(pronounced Eh-ti-enn) who is every girls dream and makes every girl sawooon(The truth about forever by Sarah Dessen inside joke). Anna like every other girl in the school develops a crush on him. But to her he is completely off limits and only one reason is his girlfriend. But  nobody stopped them from being friends. So St. Clair(that's what his friends call him, but to me he'll always be Etienne) takes Anna around Paris(i want to go there again!), to watch films and also to get drunk(with the others). Slowly they become best friends who like each other but don't tell each other(not strictly true).

This book is a total lovey dovey, teenagers bliss and cute story. Etienne always had me minutes away from melting in a puddle at his feet. Anna(banana) is alone(no parents) in the city of Paris(i would kill to be in her place) and now has new friends and her own boy toy. But that's not it. What comes next come to several realizations and strengthens her bond with Etienne(St. Clair) and makes them feel things thy shouldn't be feeling. Its a struggle, Anna is hopelessly in love with Etienne(St. Clair) who has a girlfriend but who also is hopelessly is in love with her. This is a perfect story of how 2 people who like each other at first site come to know each other better and fall in love without being together but in the end beat the obstacles between them and come to terms with so themselves. This is a 100% guarantee of "Happily ever after" flying-among-the-clouds feeling(ears-or eyes-wide open Raven). When you read this book you will be forever smiling, smiling at the cute moments, smiling at the embarrassing moments, smiling at the self-doubting moments, smiling at the silly moments, smiling at hopelessly romantic moments but laughing(those laughs which start in deep in your tummy and make you laugh so hard with your mouth open which makes everybody look open eyed at you-they won't ever get it-).

This book will leave you off your feet and make you will in the fantasy world above your head. This book will give you those moments which make you smile even after months(even years) of reading it. This book makes you want to fall in love with your Etienne and forget real life.
If that did'nt make you want to read this book, i don't know what will. Maybe my yelling at you will.
READ IT!!!
Trust me on this one and read it.

Lots of love and butter croissants(from France, of course)
Beez.

Posted by Unknown at 2:54 PM No comments:

Email ThisBlogThis!Share to TwitterShare to FacebookShare to Pinterest
Raven: Harry Potter and the half-blood prince


An awesome book by J.K.Rowling 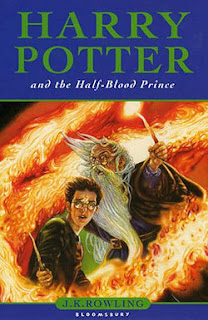 Publisher: Bloomsbury/Scholastic Press
Pages: 480
Targeted Audience: Due its awesomeness I think it is general.

Summary: The war against Voldemort is not going well; even the Muggle governments are noticing. Ron scans the obituary pages of the Daily Prophet, looking for familiar names. Dumbledore is absent from Hogwarts for long stretches of time, and the Order of the Phoenix has already suffered losses.
And yet, as with all wars, life goes on. Sixth-year students learn to Apparate—and lose a few eyebrows in the process. Teenagers flirt and fight and fall in love. Classes are never straightforward, though Harry receives some extraordinary help from the mysterious Half-Blood Prince.So it's the home front that takes center stage in the multilayered sixth installment of the story of Harry Potter. Here at Hogwarts, Harry will search for the full and complex story of the boy who became Lord Voldemort—and thereby find what may be his only vulnerability.

Okay before you guys say anything let me make one thing clear. I know that the whole world has read this book and nobody would even want a review for something this awesome but you see, I have to do it. I love this series and it's not going away from me without at least a review.

So I started reading this series three months ago (yeah yeah I am stupid whatever). I was never actually interested in reading the books. I had seen all first five movies and half of the sixth one when I realised that I had to read the books to really grasp it all.

And so it began. The end of my normal life but the beginning of one so much more cooler. As I read on I realised how stupid I had been for not even thinking of reading it when the HP books were all around me because my whole class had read it and Beez was annoyed with me reading it now! when the hype about everything was over, the books, the movies, everything but I still read on and now I am obsessed.

This book is great. Everything from character building to the plot is perfect! I wish J.K.Rowling would come to me personally and smack my face for not having read this earlier.

If someone out there has still not read it, then read it, from the first book to the last and trust me you will never ever regret having read it. It's a fantasy that is out of any of our imagination!

I love how finally we find out Voldemort's weaknesses and the ending is just fabulous, I was sobbing for half an hour after the book was over and also laughing hysterically when I remembered all the punch lines that were in the book.

I rate it a 5 on 5. The best thing that has ever happened to me. I am officially a potterhead!!

Lots of love and pasta,
Raven
Posted by Unknown at 4:46 AM No comments: 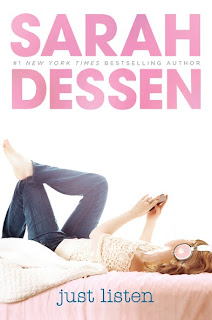 A novel by Sarah Dessen

Summary: When Annabel, the youngest of three beautiful sisters, has a bitter falling out with her best friend—the popular and exciting Sophie—she suddenly finds herself isolated and friendless. But then she meets Owen—a loner, passionate about music and his weekly radio show, and always determined to tell the truth. And when they develop a friendship, Annabel is not only introduced to new music but is encouraged to listen to her own inner voice. With Owen's help, can Annabel find the courage to speak out about what exactly happened the night her friendship with Sophie came to a screeching halt?


Don't think or judge, just listen... Ah that is so inspiring!

The story starts off with her and when Owen enters the scene it just blasts off to space. I love Owen.

He is obsessed with music and the kind of music that he listens to... speechless (In opera voice). He is always telling the truth and has got anger management issues.

He is completely honest and won't even think of lying to others whereas Annabel would do anything but say they truth. I just love both of them so much. This is another story where two people don't fall in love instantly, but the two loners of the school just happen to come together and then they fall.

Now if I keep going like this I will not stop talking about Owen and his adorably cliché sister, so moving on. We have Annabel, who was once really popular until last summer when something happened and she and the other most popular girl were no longer friends.

But that's not all. She has got problems at home as well. Her anorexic sister, her model obsessed mom and her glass house which so much like her family, showing you only what you need to see.

It may come as a surprise to others but this was my first Sarah Dessen book which I read like two months ago and before Beez shoved it over my face and forced me to take it up from the school library, I had never even heard of the author. So yeah, this concludes the fact that Beez is a bully (Hahah Just kidding... not really)

I rate it a 4.5 since I  loved how everything was put up and the way the flashbacks were portrayed was also great. So yeah, it's a great read.

Note by Beez:
I am not going to deny that i did not force Raven into reading this book, i just did it because it was for the greater good. You can relax Raven, i'm not going to kill you. I just wanted to tell you guys that i too loved this book, especially Owen's bizarre taste in music.
Go read it people!

Lots of love and lasagna
Beez.