In Sloane’s world, true feelings are forbidden, teen suicide is an epidemic, and the only solution is The Program.
Sloane knows better than to cry in front of anyone. With suicide now an international epidemic, one outburst could land her in The Program, the only proven course of treatment. Sloane’s parents have already lost one child; Sloane knows they’ll do anything to keep her alive. She also knows that everyone who’s been through The Program returns as a blank slate. Because their depression is gone—but so are their memories.
Under constant surveillance at home and at school, Sloane puts on a brave face and keeps her feelings buried as deep as she can. The only person Sloane can be herself with is James. He’s promised to keep them both safe and out of treatment, and Sloane knows their love is strong enough to withstand anything. But despite the promises they made to each other, it’s getting harder to hide the truth. They are both growing weaker. Depression is setting in. And The Program is coming for them.

Hands down, this book is absolutely fabulous. I loved this book. I could go on and on about it for hours. Its written beautifully. The author has made a very ridiculous idea (suicide epidemic) seem so real. It made me laugh, cry and smile through the tears. It is full of suspense and I could not put down this book(or my mobile since I am reading it on kindle). I was hooked. I repeat, I could not put this book (my mobile) down. I loved every moment. I loved Sloane, James(oh Jaames), Miller, Lacey, Brady, Realm and others.

At first, it's a struggle, to hide true feeling,  keeping love intact, staying together, putting walls up, protecting yourself, not giving up or breaking. There were so many ups and downs. Sloane is fighting, struggling, holding back. Or at least trying to appear well. Everyone around is giving up so it's hard not to just let go. Sloane holding on to thin threads, promises made out of love and desperation.  But it's the final straw, when the most near person to you gives up, you can't do it anymore. And when he comes back, and you're nobody to him; you're lost too. Its breathtaking and painful- losing a love. I was full on sobbing.

It still does not get better. Not when you're the next victim. Then, comes in Realm- he gives that ray of hope, brings her chicken nuggets(equally important), loves her unconditionally.

After that Sloane's discovers herself again, gets hurt again and falls for him (not telling whom) all over again. The ending is amazing. Freedom. In love "madly".

Overall The Program was a satisfying and captivating read. It was heart wrenching, frustrating to the point where I wanted to shred the book to pieces, and had beautifully written romance. I would highly suggest this to patient and strong minded people. If you have anger problems, make sure you don't read this! Also, this book was so depressing it got me depressed. Oops... I guess "The Program" will be coming for me...

This book is amazing. I have texted Raven like a million times telling her that(I'm not sorry for annoying her). Its enrapturing,  capturing, enthralling, fascinating, ravishing and bewitching and spellbinding.
I rate this book 6 out of 5!! This has taken place of my favorite book. To everyone and anyone who's reading this review, go read this book.

Posted by Unknown at 4:39 AM No comments: 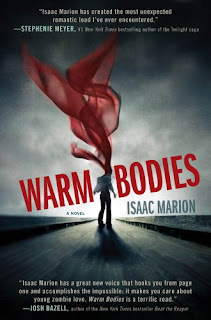 
Summary: 'R' is a zombie. He has no name, no memories and no pulse, but he has dreams. He is a little different from his fellow dead.
Amongst the ruins of an abandoned city, R meets a girl. Her name is Julie and she is the opposite of everything he knows - warm and bright and very much alive, she is a blast of colour in a dreary grey landscape. For reasons he can't understand, R chooses to save Julie instead of eating her, and a tense yet strangely tender relationship begins.
This has never happened before. It breaks the rules and defies logic, but R is no longer content with life in the grave. He wants to breathe again, he wants to live, and Julie wants to help him. But their grim, rotting world won't be changed without a fight...
I am pretty sure that almost everyone out there has seen the movie adaptation of this book which is great but about the book-Warm Bodies is Isaac Marion's debut novel and I think that it is great.

He has taken up a very original idea and typed it up beautifully. It's got-what I call-dead humor, which is breathtakingly hilarious. However, the exemplary figure of speech for a zombie is kind of weird and almost half the time I had to sit next to a dictionary to find out the meanings of the words he's used.

War between nations has been mentioned in the book and Isaac Marion has an exceptional way of describing the changes war can have on people. I was almost teary-eyed reading it. There are also parts where there are these voices speaking to him and it's really confusing to keep track between R's thoughts and the voices (that are all wise and philosophical).

Also the part where Perry is coming up on his head with weird visions. It's hard to believe that something like that would happen even if you did eat someones brain but then this is fiction! So, eh... who cares?

Now on to romance. Those little sparks between R and Julie is really cute but you don't get to see anything happening. It's just guess work. I mean R does figure out that he is in love with her but whether Julie is also as deeply in love with him is not mentioned. But maybe she is, at least that's what I think (see? Guess work). Plus we don't really get to connect with Nora, M and Perry

It's got a good ending but Julie's fathers reaction to what happens in the ending is not mentioned, so another guess work I suppose.

Anyways, according to me R is really sweet for a Zombie, almost makes me wanna cuddle him to death... if he wasn't already dead.

I am gonna rate it a 4 only because the depth and the most original idea has my head spinning. And I am not done yet, I hear that the prequel was released early this year [The new hunger (Warm Bodies #0.5)] where our connection between Julie, Nora and R is gonna deepen. So I am gonna try to get my hands on it and then a review will be on it's way people!

I thoroughly enjoyed this book. i was laughing most of the time. It was a cute read, life in the head of  a not-quite-like-a-zombie zombie.  This kind of book shows that love  can happen anywhere, anytime and anyhow, even in a zombie world, to a dead zombie and kidnapped living human. It also shows us that we can make anything happen if we want it badly.

Julie. I have no words. i absolutely like her. i like her frankness, i like her candidness, i like the way she demands food from R. Comments on everything. If she's terrified she does not show it. She makes her presence know.  i suppose if a zombie kidnapped me i'd be dead scared. I'd follow him quietly and try not to provoke him into eating or worse. If i was hungry i'd probably say in a squeaky voice, "I'm hungry", unlike Julie who blatantly orders him, "i need food". Another hilarious point is when she calls M a 'fat fuck'. Way to not provoke a zombie! But then she has her own zombie  to protect her so why ever not. I like that when the whole world is infested she has hope that it will be saved and it won't be the end of humanity. And i am definitely stealing her room decor idea for the next time i style me room.

Now lets talk about R.
R is a very unusual zombie. He has so many thing running n his head. He's always thinking. He's very advanced for a zombie. He want to feel alive. When he eats Perry's brain, he feels a connection with Julie. He's curious and very amused by Julie's antics. For a zombie, he has quite a taste in music and moments when he tries to sing them to Julie are just hilarious. Oh and tat part to when he gets married(i'm not telling who).

I loved both the movie and the book. And i totally agree with Raven's point above. The ending is kind of incomplete. I want to know what happens to R and Julie. And Nora and M. Which is why i will read the prequel. So till then, kudos.

If you're wondering whether to read it or not refer to Raven's consultation.

Lots of love and pizza
Beez.

Posted by Unknown at 4:37 AM No comments: